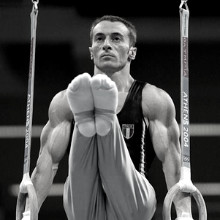 Jury Chechi was born in Prato on 11 October 1969 and has been passionate about artistic gymnastics since he was a child. He is enrolled by his parents in the Etruria Gymnastics Society of Prato. In 1984 he joined the junior gymnastics team and moved to Varese to train in the gymnasium of the glorious Varesina Gymnastics Society, specializing in the discipline of rings. From 1989 to 1995, he won 6 consecutive Italian titles, the Mediterranean Games, the Universiade, 4 European titles and 5 world titles. He wins bronze after the 1989 World Cup, gold at the 1990 European Championships, bronze at the 1991 World Cup, 6 gold medals at the XI Mediterranean Games, 5 world titles (1993-1997), gold at Atlanta 1996 and many other successes. The Lord of the Rings.