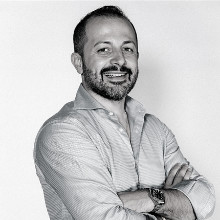 Eduardo Montefusco is the CEO and founder of FitActive, the well-known Brand in the world of Fitness.    Born in 1982, Neapolitan by birth, Eduardo grew up in Limbiate and it was from here that his professional career began. The interest in the world of fitness, however, arises when he accepts the proposal to create a management system for gyms. In a short time he got the idea and became a capital shareholder of a Club and from here, his career in the sector took off. This new path pushes him to work in the commercial sector, acquiring ever wider skills, not only in this field, but also in the managerial and marketing fields, a wealth of new knowledge that from 2007 will be fundamental for the development of what will become the behemoth FitActive.